Combatting cancer with Pint of Science 2018 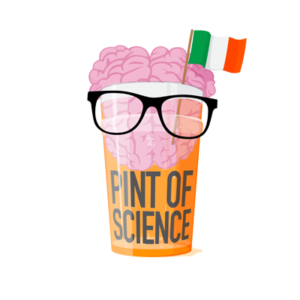 Pint of Science was started in 2012 by Dr. Michael Motskin and Dr. Praveen Paul. It grew out of a desire to communicate their research in neurological disorders to the public. The idea was to bring science to the people rather than people to the science. To help slide the science towards the people and entice the people towards the science, pints were incorporated. In 2012 the first Pint of Science festival took place in three cities in the UK. This year nearly 300 cities all over the world hosted Pint of Science talks. The mention of pints and science led to 4 cities in Ireland running Pint of Science talks this summer in Dublin, Limerick, Galway and Cork. The topics discussed across the country covered the mind, the body, technology, society, the planet and the galaxy.

My presentation was included in the sold out “Combatting Cancer” session in JT Pims on George’s Street. This series of talks was organised by Pint of Science in conjunction with PubhD. Which meant we were introduced to the evening by Ricardo and Peter from PubhD and of course also hailing from the NICB. The talks were kicked off by my colleague Dr. Neil Conlon another NICB researcher in the Cancer Biotherapeutics group.  Neil did the hard work and got the ball rolling on the presentations. 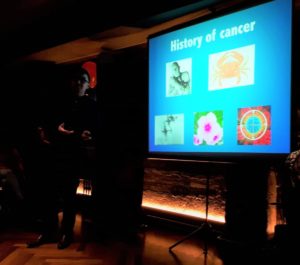 Dr. Neil Conlon taking us on a history tour through cancer research.

Neil explained how a normal cell can develop into a cancerous cell due to alterations in the cell’s DNA. If the cell with altered DNA evades the cell’s repair mechanisms and the immune system, it can continue to grow and divide, forming a tumour. We were then given a whistle stop tour of cancer research throughout history. Neil pointed out that there is evidence of bone cancer on mummified remains from ancient Egypt. He talked about the ancient Greeks performing surgery to remove tumours and the development of the first chemotherapy after the effects of an accidental release of mustard gas during a bombing raid during the Second World War were observed.

My presentation followed Neil’s. I talked about the immune system and how it can be used to fight cancer. Immunotherapy is the current “hot topic” in cancer research. New immunotherapy drugs are rapidly entering the clinic and having some great results. However we do need to work on understanding how these drugs work and how we can make them work even better. 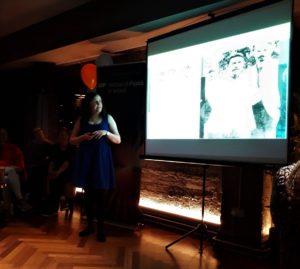 My presentation on how the immune system can be used to fight cancer.

Immunotherapy has also been around as long as far back as ancient Egypt. There is evidence of the pharaoh Imhotep in 2600 BC creating an incision near a “patients” tumour and allowing an infection to occur. If he had any success with this method it was most likely down to the immune system…whether he knew what he was doing or not! Following on from this throughout the centuries there was anecdotal evidence of patients that developed infections showing regression in their tumour. In the late 1800s William Coley decided to investigate this. Coley injected bacteria directly into patients’ tumours to boost the immune system to fight cancer. A lot of physicians at the time thought that this was a crazy approach to fighting cancer (a number of his patients did die from the infections he was injecting them with). However he did have some success with his radical treatment. A modified bacteria cocktail was made with dead strains of bacteria less likely to cause death. This treatment, Coley’s toxins, was relatively successful in some cases and was used until the 1950s.

During my talk I explained how I examine this effect in the lab. I obtain blood samples from healthy volunteers. I isolate immune cells from these samples. Once I have my immune cells, I can mix them with cancer cells and different immunotherapies. After an incubation time I can measure the amount of cancer cells the immune cells have killed. This means I can compare different immunotherapies and try to understand how they work. Hopefully this will allow us to come up with the best combination of drugs to help the immune system fight cancer. I really enjoyed giving my talk and definitely enjoyed the pint once I had finished with my part of the science!

Dr. Catriona Dowling presented next and discussed cancer prevention and early diagnosis. She gave a very informative talk on the risk factors associated with cancer, such as sun exposure, diet and exercise, alcohol intake and smoking. I think many people in the room were shocked to hear that getting sunburned even once every two years triples your chances of developing melanoma. Hopefully this kind of information will raise awareness of the risks associated with cancer and lead to people minimising their exposure to risk factors. Catriona also emphasised the importance of early diagnosis of cancer to boost your chances of a good response to treatment. Using the analogy of weeds in a garden to explain the importance of early diagnosis and treatment. If you see a weed in your garden you pull it, rather than letting the weed continue to grow and spread all over the garden. Communicating information about cancer prevention and the importance of early diagnosis to the public is very important, and Catriona did a great job at advising us on how to minimise our risk of developing cancer.

We then had a few minutes to collect ourselves while we got served some chips and cocktail sausages, the perfect accompaniment to a pint of science! The event (and the food) were sponsored by Hindawi and Institute of Physics in Ireland. After our refreshments, Assistant Professor Stephen Maher gave his presentation. Stephen talked about how cancer develops and how our risk of getting cancer increases with age. How we can pick up new mutations in our DNA each time our cells divide. He used a great analogy of old car engines and the faults they pick up over time to explain this. Stephen also discussed his work in oesophageal cancer and recognising how it develops. He also explained his work in examining microRNAs that may be associated with sensitivity to radiotherapy. His group in Trinity are now validating their candidate miRNAs with the hope of translating this to a benefit in the clinic. I think the public learnt a lot from Stephens talk particularly about the interesting work he and his lab group are conducting in Trinity. 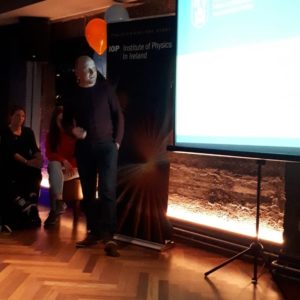 We then moved on to the panel discussion which brought us all up in our cushy chairs to the front of the pub for our cross examination! The discussion session was very interesting with a great level of engagement from the audience. Cancer risk factors and new research in cancer treatment dominated the discussion. After all the audiences’ questions had been addressed we wrapped up the evening and finished our pints!

The whole evening was a great experience in communicating cancer research to the public, I would heartily encourage anyone interested to partake in the next Pint of Science, which I am sure will go from strength to strength. Particularly with cancer research I feel it is important that people understand what cancer is and are aware of the work going on to fight the disease. 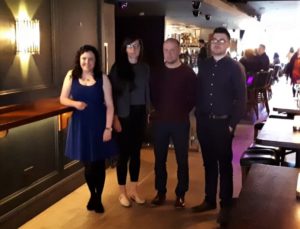 Presenters at this year’s Pint of Science talks on “Combatting Cancer”. 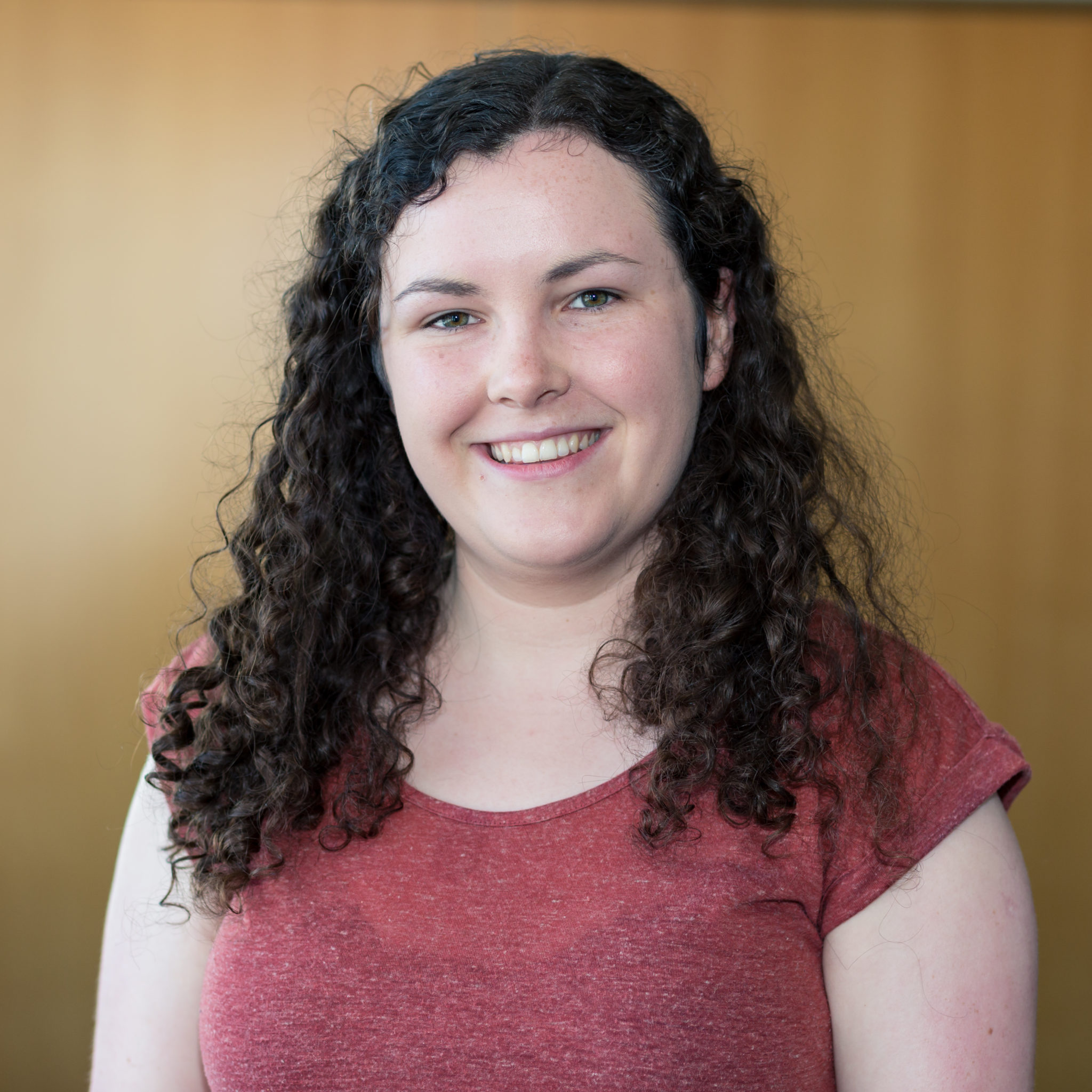