State of the art: Sophisticated production of Biopharmaceuticals

Isolated from the ovary of a Chinese hamster in the 1950s, the Chinese hamster ovary (CHO) cell has become the bedrock of the biopharmaceutical industry. With a projected value of $386.9 billion by the end of 2019, it is the fastest growing sector in Ireland and makes up ~50% of Irish exports per annum.

Ireland has now placed itself as the international home for pharmaceutical companies with 9 of the 10 leading biopharmaceuticals having manufacturing sites here. The Irish Development Authority (IDA) constantly showcases the leadership the emerald isle possess in biopharmaceutical drug production with companies like Bristol-Meyers Squibb (BMS) investing a further $900 million at their site in Cruiserath in Blanchardstown. This is an exciting area of research to be involved in and as so, I am involved in various research programmes which have real translational impact on the current climate of bio-manufacturing.

The industry is under constant pressure to evolve and develop novel therapies for the treatment of various diseases such as rheumatoid arthritis and cancer. CHO cells have become such a key player in the production of recombinant biotherapeutic proteins because of the complex, human-like, post-translation modifications added to the protein during its synthesis which ensures high drug activity and low immunogenicity. This mammalian cell line has served the biopharmaceutical industry for the past 3 decades and because so has earned itself a good track record for safety with the Food and Drug Administration (FDA) and the European Medicines Agency (EMA). 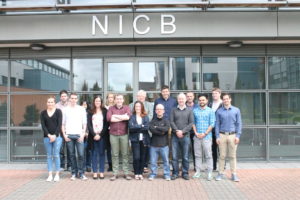 The Mammalian Cell Engineering group under Director Dr. Niall Barron at the National Institute for Cellular Biotechnology (NICB) located in Dublin City University focuses its research on improving the performance of CHO cells for the production of biopharmaceuticals.

With the increase in the incidence of various diseases such as cancer and the swift development of novel therapies moving through clinical trials, the biopharmaceutical industry is met with a bottleneck in relation to meeting the global demand for certain drug products and keeping up with emerging products, given the extensive time lines associated with cell line development. Despite g/L yields being routinely achieved, CHO cells are grown in vast 10,000 litre bioreactors to ensure that product demand is met. The sheer scale of these manufacturing facilities bring with it a high cost of production for these therapeutic drugs and as a consequence, the cost of these life-saving therapies is high.

One area of particular interest in the mammalian cell engineering group is microRNA (miRNA or miRs) and their potential as engineering tools to genetically modify CHO cells to alter and improve their bioprocessing traits such as growth, ability to survive longer and production capacity. miRNAs are attractive molecular tools as they are small non-coding RNAs which have the capacity to regulate entire pathways through simultaneous target interaction. This regulation is at the post-transcriptional level thereby inhibiting protein translation and the viability of miRNAs as “engi-miRs” has grown over the last few years (see Review from our group). The non-coding nature of miRNAs minimises the translational burden on the protein producing CHO cell allowing for cellular resources to be committed to protein drug production.

Two miRNAs have gained considerable interest by industry, miR-7 and miR-23. Both of these miRNAs, when depleted using a microRNA sponge construct where observed to prolong cell survival and product yield in the case of miR-7 and triple product yield in the case of miR-23. DECOY-7 was developed at the NICB, culminating in a multitude of primary research articles which showcase its utility as an attractive engineering target for improving CHO cell production characteristics. Since its development, we’ve had considerable interest from industrial manufacturers such as our strong collaboration with Biogen Idec from Boston, Massachusetts. 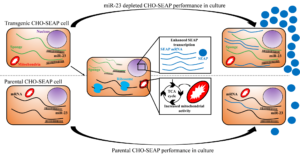 The Mammalian Cell Engineering Group strives to adapt to meet the current needs of the biopharmaceutical industry. The Irish Pharmaceutical Healthcare Association (IPHA) plays a key role in driving translational and targeted research programmes in the pharmaceutical industry to meet Ireland’s growing healthcare needs. As part of a Science Foundation Ireland (SFI)-funded collaboration in association with the Synthesis and Solid-State Pharmaceutical Centre (SSPC), I am part of a dedicated research team exploring the potential risks associated with single-use plastic bioreactors. There is considerable interest in the biopharmaceutical industry to move away from the use of large 10,000 litre stainless steel bioreactors which are costly to initially build and subsequently clean between production runs and adopt the use of smaller scale disposable plastic bioreactor bags. 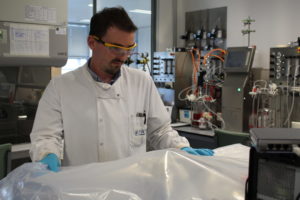 Reservations for full implementation of these systems however ripple throughout the industry because of potential toxic leachable compounds from these polyethylene-based films that can contaminate the bioprocess posing a risk to both the process itself or the patient. One such reported leachate is bis(2,4-di-tert-butylphenyl)-phosphate (bDtBPP) which we have characterised to reduce CHO cell growth by 50% at concentrations as low as 0.035-0.1 mg/L in a recent Biotechnology Progress publication.

This observation is significant because it has previously been shown that this concentration can leach over the course of a bioreactor run which can open the bioprocess to risk in relation to considerably reducing the yield of therapeutic protein produced. Working in concert with our academic collaborators in the National Institute for Bioprocessing Research and Training (NIBRT) and Trinity College Dublin (TCD) and with support from our seven industry partners (Allergan Pharmaceutical Ireland, BioMarin Manufacturing Ireland Ltd., Eli Lilly and Company, Genzyme Ireland Ltd. – A Sanofi Company, Janssen Biologics, Merck Sharp & Dohme (MSD), Pfizer Ireland Pharmaceuticals), this project aims to fully characterise the risks, if any, associated with disposable bioreactors which will settle any concerns related to their safety and allow for the widespread adoption of this technology within the biopharmaceutical industry.

The Next-Generation of production cells

Whole genome sequencing has come a long way since the release of the human genome which cost a staggering $3 billion and 13 years to complete. Now, entire genomes can be sequenced for as little as €1,000 in just a few days making this technology more accessible to academic research groups like ours. 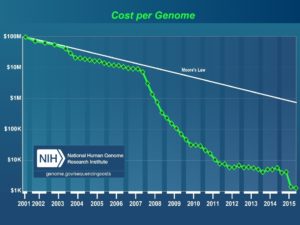 We have undertaken a project in collaboration with Dr. Colin Clarke at the National Institute for Bioprocessing Research and Training (NIBRT) to identify genetic differences in the mitochondrial DNA of a panel of CHO cell lines. The mitochondria itself is the epicentre of cellular energy production and mitochondrial disruption can be a source of disease. The mitochondria is a cellular organelle which arose around 3 billion years ago through a symbiotic relationship with bacteria. As a result the mitochondria carries its own DNA template separate from nuclear DNA. This study has revealed widespread heteroplasmy throughout the CHO cell mitochondrial genome i.e. multiple mitochondrial DNA copies per CHO cell, each of which have unique genetic differences. This work will be used to identify CHO clones whose energy capacity best suit them for biopharmaceutical therapeutic production. We have also published the first Chinese Hamster Mitochondrial reference sequence, thereby making it available to the scientific community. I have won a bursary to present this work at the upcoming ESACT-UK conference this January in Oxford where leaders in the animal cell culture community meet to discuss the most recent innovations and promising directives in the field.

Biopharmaceutical drug production is a continuously evolving field with more advanced and complex therapies being developed. To keep up with this pipeline, a better understanding of the host CHO cell line is critical to ensure the efficient production of these emerging sophisticated therapeutic proteins. The CHO group at NICB is a multidisciplinary group comprised of post-doctoral and post-graduate researchers in the areas of molecular cell biology, cell engineering, proteomic analysis, transcriptomic analysis and sequencing capabilities. We have a long standing relationships with academic collaborators both nationally and internationally in addition to strong ties to industry. As a centre of excellence and innovation, the CHO group in the NICB under the leadership of Director Dr. Niall Barron strives to understand the biological mechanics of the hardest working cell on the planet. 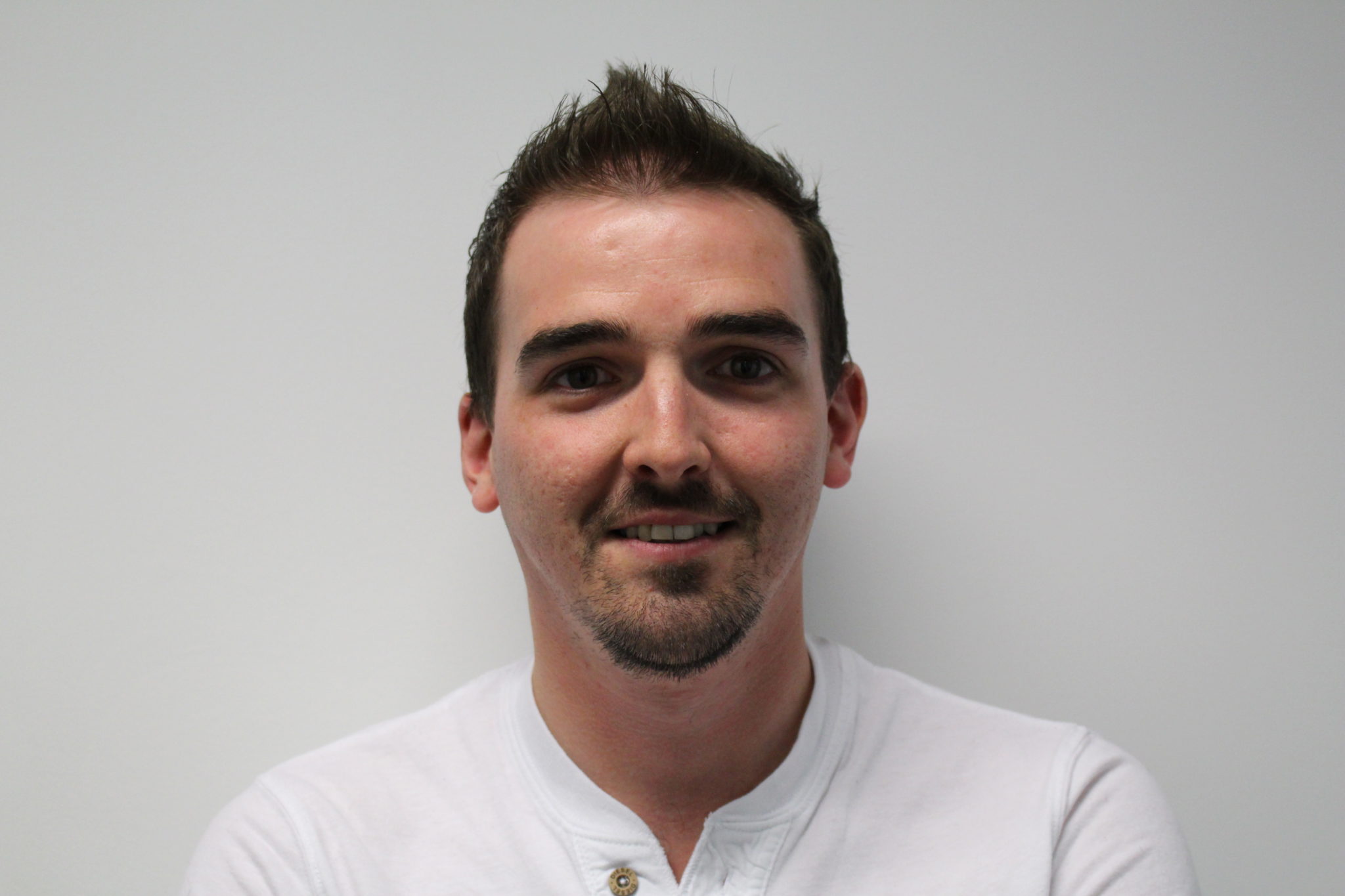