What is a Monoclonal Antibody?

Originally discovered by Emil Von Bering and Paul Erhlich, antibodies are proteins produced by the immune system that target a specific foreign object (antigen). They are called monoclonal Antibodies (mAbs) when they are produced by clones derived from a single parent cell. Monoclonal antibodies have a high affinity for their epitope, the specific site of the protein they bind to.

Reproduced from The Biology Project, University of Arizona, AZ, USA

mAbs are widely used in laboratories for research and diagnostics purposes.

Nowadays they can also be produced in large quantities as immunotherapeutics against a range of inflammatory diseases, infection and cancer. mAbs are used in immunotherapy in order to boost the body’s natural defences.

There are four types of monoclonal antibodies:

Hybridomas, developed by César Milstein, Georges J. F. Köhler and Niels Kaj Jerne in 1975, are antibody-secreting cells. They consist of the fusion of B-cells (antibody producing white blood cells) harvested from the spleen of an animal exposed to an antigen with an immortalized cell line of lymphocytes from mouse (myeloma cells) made sensitive to HAT (Hypoxanthine, Aminopterin and Thymidine). The fusion is induced with polyethylene glycol (PEG). Fused cells are then grown in a selective HAT medium in order to kill the myeloma cells that haven’t fused. If not destroyed, these cells would multiply faster than the hybridomas and outgrow them. With their limited lifespan the unfused B-cells, not immortalised, will die naturally.
The use of feeder cells can help the growth of hybridomas although batch to batch variations and competition for nutrients between the different cell types are common problems. To overcome these difficulties, commercially available additives can be added to the hybridoma growing medium, such as BriClone (NICB), DomaDrive (Immune Systems Ltd) and UltraCruz (SantaCruz).

Since Muromonab-CD3 (OKT3), the first licensed mAb for clinical use in humans appeared on the market in 1986, the process of producing antibodies has developed greatly.
Advanced molecular biology engineering tools have enabled bulk production of recombinant IgG in Chinese Hamster Ovary (CHO) cells. The ever evolving research on these cells has contributed to better culture characteristics leading to better product titers. 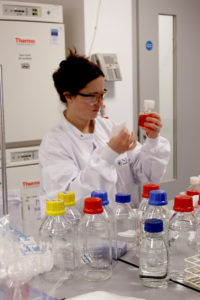 Monoclonal Antibodies research at the NICB

MONOCLONAL ANTIBODY GROUP
Lead by Dr Annemarie Larkin, this group of actively works on developing mAbs that can inhibit cancer invasion. By targeting proteins involved in metastasis, the group hopes to tackle this mechanism and subsequently stop tumour cells to spread to other organs.
They are also working on identifying novel membrane proteins in cancer cells in order to treat this disease using Antibody-Drug Conjugates (ADCs). 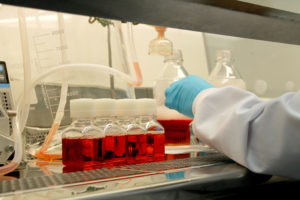 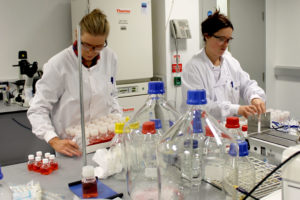 CHO GROUP
Under the supervision of Dr Niall Barron, Dr Paula Meleady and Prof Martin Clynes, we have a dedicated team of post-graduate and post-doctoral researchers working towards developing genetically manipulated CHO cells that have better phenotypes, i.e. increased viable cell density (VCD) and antibody production.
The group current projects focus on genome editing techniques such as CRISPR/Cas9 and miRNA and lncRNA engineering. Along with functional genomics, cell growing medium/conditions are constantly investigated in order to obtain better producing clones. 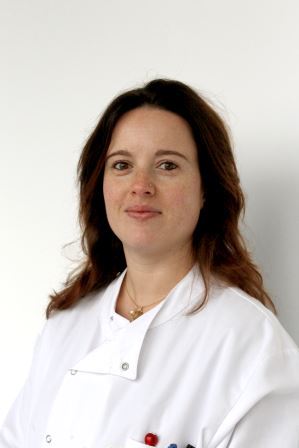